The setups which come to ISOLDE for shorter periods are usually systems used for detection of specific decay modes of the studied nuclei. Some of them measure the gamma-rays and beta decay and strive to reconstruct the position of excited levels of the nucleus. Others use very fast gamma detectors which can say for how long different excited states live. There are setups which detect neutrons or protons, as well as alpha particles which are emitted in the decay of some nuclei. Also, systems to measure the millisecond to minute lifetime of different isotopes are used. The physics interest of these experiments spans from nuclear structure physics, through nuclear astrophysics, up to fundamental studies and applied science.

COLLAPS (COLlinear LAser SPectroscopy) is a small experiment located at the “isotope factory” ISOLDE at CERN. Its aim is the investigation of ground state properties of exotic, short lived nuclei, such as spins, electro-magnetic moments and charge radii. All these observables contribute widely to our understanding of the nuclear force – they give valuable information about the coupling between nucleons, about symmetry of the nuclear wave-functions and thus about the symmetry of the nuclear interaction itself." 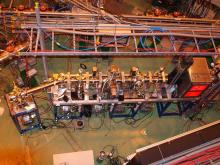 The CRIS (Collinear Resonance Ionization Spectroscopy) experiment at CERN ISOLDE is joining together the high resolution of collinear laser spectroscopy with the high efficiency and selectivity of resonant ionization. It is used to study the ground-state properties of exotic nuclei, such as spins, nuclear moments and shapes, and to produce beams of high isomeric purity for dedicated decay studies. 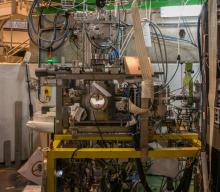 EC-SLI (Emission Channeling with Short-Lived Isotopes) is an experiment at ISOLDE dedicated to studying the lattice location of dopants and impurities in single crystals and epitaxial thin films. The main fields of work currently include semiconductor doping for applications in electronics and colour centers in diamond and related materials for quantum technologies, among others. While EC-SLI is the on-line setup for short-lived isotopes located at the GHM beam line, it is complemented by three off-line ones, also at ISOLDE, which are suitable for longer-lived isotopes with half-lives above a few hours. 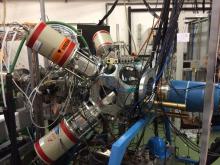 The ISOLDE Decay Station (IDS) is a permanent experiment at the ISOLDE facility dedicated to measure the decay properties of radioactive species of importance for nuclear structure, nuclear engineering and astrophysics. Gamma-ray detection is provided by four HPGe clovers and one MiniBall HPGe cluster. A variety of experimental systems can be coupled to the station for specialized decay measurement, such as fast timing measurement of excited states lifetimes, proton and alpha particle emission, and neutron time of flight detectors for neutron energy spectroscopy. This makes the IDS an ideal tool to study the nuclear properties of species across the nuclear chart, from the lightest species that fragment in charged particles to the beta-delayed fission of the heaviest nuclei. 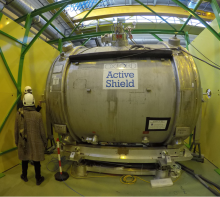 The ISOLDE Solenoidal Spectrometer (ISS) is being developed for precision studies of inelastic scattering and transfer reactions induced by radioactive ion beams from HIE-ISOLDE. A broad science programme addressing important topics in nuclear structure and nuclear astrophysics is envisaged. The ISS has an advanced design that employs the proven HELIOS concept, whereby light charged particles emitted during the nuclear reactions are transported with high efficiency by the solenoidal magnetic field to an array of position-sensitive silicon detectors mounted on its axis. Measuring the particle energies and interaction positions in the silicon array allows the reaction Q-value to be determined without the problem of kinematic compression encountered in more conventional approaches. 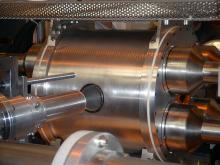 Lucrecia is a Total Absorption gamma Spectrometer (TAS) located at the ISOLDE hall. It has been designed to measure feeding in beta decay through the detection of the gamma cascades following the decay. The b-feeding is one of the main ingredients in the calculation of the b-strength function, and is thus an essential element in the  proper estimation of the B(GT) or B(F). The use of the TAS technique is an alternative to high resolution gamma spectroscopy based on Ge detectors, which is affected by systematic errors due to the “Pandemonium effect” particularly for large Q-values.

The high-resolution Miniball germanium detector array has been operational at REX-ISOLDE at CERN for over 10 years. This array consists of 24 six-fold segmented, tapered, encapsulated high-purity germanium crystals and was specially designed for low multiplicity experiments with low-intensity radioactive ion beams (RIB). For work with rare-isotope beams, the multiplicities are low (often only a few states are excited) and the yields of such beams are usually much lower than for conventional experiments, so efficiency is paramount. High granularity and high efficiency were achieved by the segmentation of the charge-collection electrodes of the Ge detectors and the use of pulse-shape analysis to determine the position of the first interaction of the γ ray within the Ge crystal, giving a spatial resolution significantly finer than the dimensions of the crystal. 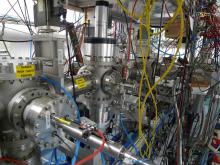 The Multi Ion Reflection Apparatus for Collinear Laser Spectroscopy (MIRACLS) at ISOLDE aims to measure nuclear ground-state properties such as the size, shape and electromagnetic moments of rare radioactive isotopes. These properties are extracted from the measurements of the isotopes’ hyperfine structure using laser spectroscopy. MIRACLS’ goal is to increase the sensitivity of conventional, fluorescence-based collinear laser spectroscopy by confining the investigated ions in an ion trap. This novel scheme allows for the ions to be probed up to several thousands of times. 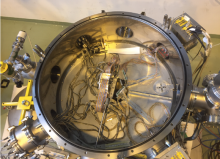 SEC (Scattering Experiments Chamber) at the XT03 Beamline of HIE-ISOLDE is an experimental station to facilitate diversified reaction experiments. The chamber is sufficiently big to accumulate a variety of charge particle detectors as well as scintillator detectors for gamma detection. It is equipped with a rotational disc of 50 cm radius radially graduated and supplied with Al-bars for precise support and positioning of detectors. A VME DAQ system with optical fiber readout of Si-detectors (320ch), together with a 16ch digitizer for scintillator detectors. This makes SEC a versatile station for reaction experiments to study low-lying resonances in light nuclei via transfer reactions.

VITO (Versatile Ion polarisation Technique Online) is a permanent beamline at the ISOLDE facility devoted to versatile studies with laser-polarised radioactive beams. The research at VITO is centered around the details of the weak force, properties of short-lived unstable nuclei and their role in nucleosynthesis, and even chemistry and biology. Material studies will be added soon. The setup for spin polarisation can be coupled to several end stations. 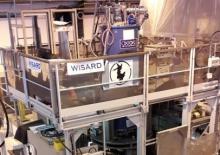 The WISArD experiment has been set up for investigation of the weak interaction focussing on the b-n angular correlation coefficient of 32Ar by looking at beta-delayed protons emitted from the daughter nucleus 32Cl. As the protons are emitted from a moving source, the proton energy distribution is thus subject to kinematical broadening and a kinematical shift.